Due to some free days I started working on Uber Zombie 2. This idea is something we had from the success of Uber Zombie 1. we had lot of ideas like more zombies, more player models, more weapons like gradates and a shotgun n stuff, a decent menu like you guys are used to from .S.C.A.G. or NecroSPACE. Yes, FUR lacked a nice menu interface and so did Uber Schraal. Because of that we started working on a decent menu for Uber Zombie 2. Something that would attract the users attention.

So first the menu. It’s no rocket science but still very important as it get the users first impression on the game. It can be controlled by the mouse and keyboard at the same time, something that Uber Zombie 1 menu could not. The menu features some extra’s like level selection, player selection, achievements and at the end of each level a short list of who killed the most zombies.

Game play wise Uber Zombie 2 is not that different from Uber Zombie 1. Kill all zombies, go to the next level, kill all zombies and so on with a maximum of 4 players at the same computer. The extras are that it will feature more zombies and more weapons and planned to create some levels that you must play with 2 or more players. Those levels are of course not available in single player.

Graphics-wise it’s also the same as Uber Zombie 1. Lots of white glowing zombies, colored players, and lots of red “blood” and guts if you shoot the zombies!

Here are some in-game and menu screen shots!! Please give us some feedback if we can improve the menu and/or game!

Note: most of the graphics are placeholders and will be replaced! 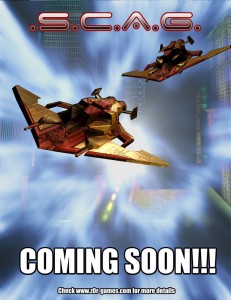 Somewhere in our dark past we mentioned that .S.C.A.G. would be release commercially around the world. Well, guess what: the final wait is almost over!

We don’t have as much fans as Duke Nukem forever, but hell we can stretch the release for a looooong time! (Almost 3 year I think.)

.S.C.A.G. will be release in the Team6 Game Store and will cost a no more than a few bucks.

When my college Peter discovered that Uber Zombie was an addicting game, he played the game on and on until he ran around for 6 times and has to fight 7700+ zombies on his own!

Screen shot or it didn’t happen! (more screen shots have been added to the project page) 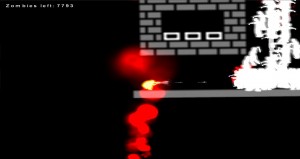 As some may know we want to release every year a new game. Now that time is against use, we are creating a simple game. The name we already have: Wings of Thunder! Game play technical it should be similar to .S.C.A.G. with new models, environments and lot of physics and explosions!

Here’s an alpha preview movie of what we have so far. Physics are in place and working! Goal is to make it pretty chaotic… 🙂

A while ago we participated in the PGD compo “Arcadia”. After a long wait with an extended deadline finally we have the results.  And guess what: we are 3rd out of 4. Actually we hoped on something better because we put a lot of effort in this game.

Why we came in 3rd: you can all read it here.

The main reason is that we are 3rd, is that our entry suffered from input lag  due to the high system requirements. With this we really  missed some points.

You can see the results here at the Pascal Game Development website.

As we made a nice game for the competition we also have some future plans for FUR. First thing is that we want FUR to be BIG. This means:
– More cars
– More tracks in different settings
– 1 or 2  extra game modes
– Last but not least: Multiplayer!!

We already did some work to make it BIG! Last week I started to rewrite the GUI system to be more dynamic. It features very basic scripting engine. Also it might be useful for other games we release in the future.

Next thing is that the physics library is out dated and the car physics are too heavy. This also requires a migration to a new version of the physics library we use: Newton Game Dynamics 2.0. Some new features of this library that can come handy in the future is procedural destruction and multi threaded physics calculations which will speed-up things a lot.

As we want to migrate to a new physics engine, we also require some internal changes on the vehicles code.  In this case we require a rewrite of the vehicle physics and vehicle system. For the eye it should remain the same, but the code should be more efficient and creation of vehicles more flexible.

The final wait is over! After some sweat and tears we completed FUR for the PGD Annual Arcadia competition! You can grab a copy and start racing here! We left out some features like multi player and an online high score table, but we still have some future plans for this game! Stay tuned and us know what you think of this game!

The PGD compo deadline is near. Only one week left and still much to do.

We’ve done a lot the last couple of days like adding light flares, tuning car physics, track testing, adding sounds, made a game over sequence, score counting  and of course fixed a lot of bugs.

Things we still need to do include online and local score table, enter name and game over menu, skid marks, sparks and multi player support.

Anyway here are some random images I took while developing: enjoy!

Today we where working on tire smoke. Here is a movie that shows the smoke as we have it implemented. The thick smoke was just for fun. Enjoy!

Created a new track again. While playing I thought I give it a shot and started recording it. Enjoy!