The engine is still under heavy construction and therefor there is no download-able version available.

The goal of Hell Tech Game Engine is to create an engine that requires no setup time. Due to the plugin design you create your own plugin (or game) from which you have some control over the render pipeline. As the engine is plugin based, you can run multiple different game simultaneously in one engine on the same screen, split over multiple scenes.

Hell Tech Game Engine features a plugin based architecture. This allows you to easily run game code inside the editor as well as in the game. The games are also plugins what means that they can run together in the same scene at the same time.  Also games can provide an interface to communicate with each other within one scene.

The engine takes care of the multi threading,  updates and render calls so a game can directly be created instead of having to set everything up.

The engine provides a strong simple interface to communicate with today’s computer hardware. The editor, Hellbox, provides tight integration with the engine to to ensure rapid game development. 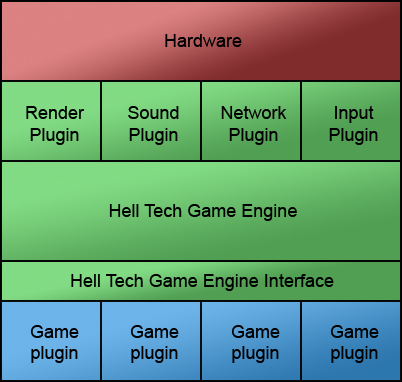 The common game plugin is the plugin where the light, physics and gui is defined. This is seperated from the engine to make it easier to include your own light or physics engine.

One thought on “Hell Tech”